“Scenes are capsules in which compelling characters undertake significant actions in a vivid and memorable way that allows the events to feel as though they are happening in real time.” 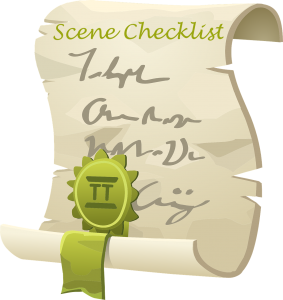 [  ] Has 3 reasons the scene should exist. Possibilities:

[  ] Point of view (POV) character – character with the most to lose in the scene – reveal immediately.

[  ] Reader immediately grounded in who, what, where, when, why.

[  ] Setting – revealed through what POV character reacts to, sees, hears, does.

[  ] Fear hovers – character might not meet her scene goal.

[  ] Obstacles – people, events, emotions, secrets get in the way of characters meeting their goals.

[  ] Climax (disaster) – relevant to the plot or characterization.

[  ] Ending hook – transitions to next scene; entices reader to read on.

[  ] Pushes away from something negative; pulls toward something positive (emotional or physical). 1

[  ] Reader can identify or empathize; knows whom to root for.

[  ] Secondary characters – clear purpose for being in scene.

[  ] Hints of wounds, fears. Or competencies.

[  ] Characters’ voices – distinctive; could know speaker by his word choices.

[  ] Reveals or hints at emotions, undercurrents, or secrets.

[  ] Coincidences (something drops in to save the day).

[  ] Clever writing that adds nothing; confuses.

[  ] Weasel words – except when they work in dialogue.

[  ] Short narratives when necessary (getting from one place to another).

What would you add to this checklist?

← Prev: 3 Components That Help You Create a Strong Story Next: One Easy Way to Take an Unexceptional Scene in a New Direction →