“First attempts are usually not the best. There’s a reason the “test” pancake is usually a throwaway, and upgraded cellphone models are rolled out roughly every four days.” —Leigh Anne Jasheway “Improv/e Your Writing” Writer’s Digest November/December 2013 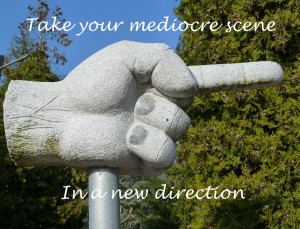 I wanted to try one of Leigh Anne Jasheway’s 10 games from her article, “Improv/e Your Writing” (Writer’s Digest November/December 2013). Jasheway calls the game I played, “New Choice.” It’s to help when we’re “going down a literary dead end.” 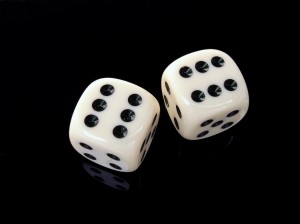 How I understood the play:

My selection is from an old rejected manuscript. I rolled a 7.

Jonathan thumbed to the first hymn listed in the bulletin and stuck his bulletin in the hymnal to hold the place1 Movement to his left startled him, and he looked up. 2 Laura, followed by Cecil, sidled down his row and sat next to him. 3 The sleeve of her yellow jacket brushed the sleeve of his sports coat. 4 She smelled like fresh-cut citrus. 5

Well, well. 6 Laura Midkiff had decided to befriend him after all, and she didn’t take her commitment lightly. 7 He, and most likely everyone else in the congregation, stared at her. 8 She donned a serene expression and gave her father in the pulpit her attention. Her father struggled to contain a grin. 9

A hand patted Jonathan’s shoulder. 10 He turned and greeted his foreman, Gene Pasternak, and his wife and two sons. 11 Mrs. Withers, his first and fourth grade teacher, settled in the pew in front of him, and Mrs. Mackey, his den mother, winked at him and joined her. 12 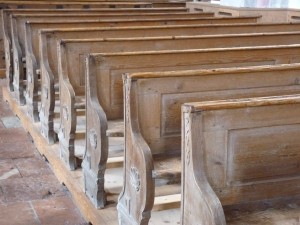 Here’s the result of steps 1-5— my 12 replacement sentences starting at line 7:

How thoughtful of Laura Midkiff to sit beside him in church.1 No doubt, the woman was up to something.2 Town gossip pegged her as the citizens’ choice to run against Dad for mayor.3 Perhaps her show of friendship helped to that end.4 Display how noble she was to rub sleeves with an ex con.5 And no surprise she’d enlisted slow-witted Cecil.6 He added political correctness points to her glory.7

Was he coming down too hard on Laura?8

Even if her gesture was sincere, he didn’t want her pity.9 He needed her help.10 And that didn’t mean rallying the congregation to his side.11 Laura Midkiff was the only person who had the contacts he needed to prove he was innocent of manslaughter.12

I hope the new version adds tension. At this early stage in the story, warm fuzzies were a mistake.

What are your thoughts on playing Jasheway’s game?

← Prev: A 50-Item Checklist You Won’t Want to Leave Your Scene Without Next: Use These Moviemaker Wisdoms to Bring Your Novel’s Scenes to Life →