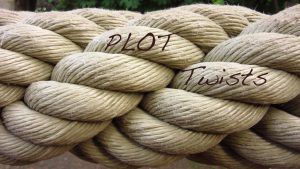 Possibly you have the big, must-have twists, such as the inciting incident at the story’s beginning, the mid-story crisis in which the protagonist realizes his underlying problem, and the black moment event near the end. But plot twists are also needed during the in-betweens.

The list below gives the first 12 plot twist ideas, examples, and the expected questions readers will have. In Part 2 next week, I’ll supply a second set.

First, here are two tips for twists in general.

What is a favorite plot twist you’ve read?