“The style, technique and methods used in film and TV are so familiar to us, we process them comfortably. To some degree, we now expect these elements to appear in the novels we read – if not consciously, then subconsciously.” —C. S. Lakin 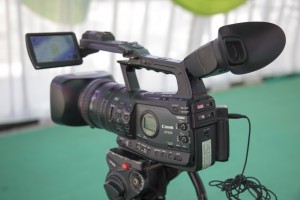 I read, “Writing a Novel? 6 Visual Storytelling Techniques to Borrow From Film and TV” by C. S. Lakin on The Write Life blog.

Among other things, Lakin’s suggestions showed me how to stop inserting senses into a scene, and making them part of the experience.

I invite you to read Lakin’s blog. Here’s what I did from Lakin’s suggestions.

1. I broke my ho-hum scene into segments like a movie director does. Each segment represented a key moment:

2. Then for each segment, I imagined where my camera needed to be: 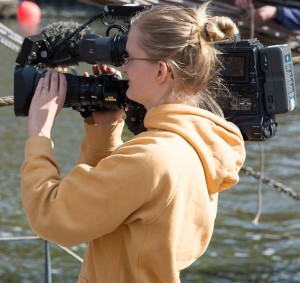 Example: My hero and heroine sit in a Christmas Eve midnight service.

In my heroine’s point of view, I zoomed out and saw two pastors bring flames from the altar to the congregation. They start the chain in which people in the pews pass the flame to their neighbors’ candles.

Then I zoomed my lens in on the hero beside her. He whispers in her ear something she doesn’t expect. I zoomed in closer as she studies his profile and has an epiphany about him.

3. Next I considered background noise, instead of trying to think of sounds I could insert.

In my example scene, the only sounds in the draft version were the hero’s whispering in the heroine’s ear and the congregation singing “Silent Night.” I sat in the pew with her in the opening segment and listened. Ah. Soft organ music played.

In another segment, I heard a man’s cough farther back in the sanctuary. And when the candles glow in the dark before “Silent Night” is sung, I noticed the silence.

In a segment when the hero and heroine walk home, I heard the hum of a car passing. 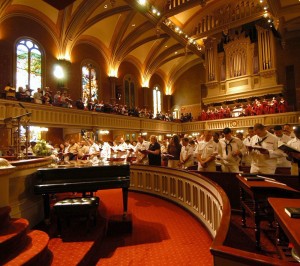 4. Next, I colored my scene. Not inserting colors so much as seeing them in my segments.

In one segment, considering what some colors imply, I sat in the pew and saw the red carpet on the stairs the pastors climb to the altar to light candles. In a zoom, I saw the white candle in the heroine’s hand.

5. Finally, I looked for textures of weather or atmosphere.

While inside the church, I remembered from past Christmas Eve services how I loved when the lights were dimmed and only the glowing candles emitted a warm and meaningful light. 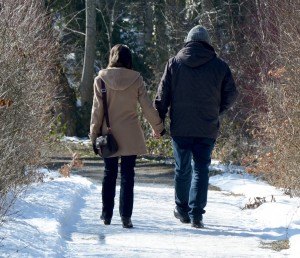 On their walk home, it’s snowing. I saw the snow gathering on the hero’s hair and eyelashes. I felt snowflakes cold on the heroine’s face, making her lower her head against them.

The items I added to the scene were those I visualized through my camera. They weren’t the plot or action, but they brought what surrounds the action alive.

Get out your camera and see what needs to be added to your scene. Click to tweet.

What might your camera see in the scene you’re working on as you zoom in and out?

← Prev: One Easy Way to Take an Unexceptional Scene in a New Direction Next: What 5 Experts Say About Writing Story Settings →