“I needed a change of scenery in order to continue writing my third novel. A big move … from one side of the family room to the other.” —Amy Sue Nathan (Writers Digest July/August 2015)

We writers pen our works from such places as a corner in the family room, a coffee shop, a library, or an office. But might we write better if we employ separate spaces for different writing tasks. We may have spots that work well for writing and others better for brainstorming.

I use five spaces for my writing undertakings.

Preferring silence when I work, I’m fortunate to have an office in our home that I designed for writing.

Is an office necessary? No. (I once enjoyed writing from my bed.) But you can locate or create spaces that arouse your senses and put you in a writing mood for various tasks.

Here, I study the Bible, pray, and write Bible lessons I use for teaching and speaking.

This spiritual space focuses my writing on God’s Word.

Here, I abandon my computers. I seek God on writing problems, peruse writing craft resources and well-written novels, and brainstorm. I jot the gems I receive in a notebook.

This relaxing space encourages my brain to learn and brainstorm.

Here, I sit in a basic straight-backed chair and get down to business. My notebook of jotted tasks, ideas, and reminders accompanies me. I work on blogs, stories, marketing plans, and sales tax reports.

This business space keeps me on task. The view offers quick breaks.

Here, I turn the radio off and use my half hour to work on story problems with God.

Here, I relax and allow my Co-author to slip ideas and corrections into my thoughts.

How do you use assorted spaces in your writing experience?

“When I grow up I want to be a little boy.” —Joseph Heller

I think inner children get tired of waiting for their adults to consult them. They keep reminding their adults creativity peaks around age 5. But their adults ignore them.

It’s time to stop pretending your inner child isn’t there. For Pete’s sake, put her silly idea on your brainstorming white board. And before you knock on her door for help, read the sign taped askew there. “Eccentric geezers allowed. Irritable geezers keep out.”

Think back to when your inner child was the outer child. Or peruse your record of the things your child said or did before he was relegated to inner child. Haven’t children come up with some doozies? To avoid punishment. To get what they want. To enjoy creative play. To bolster courage.

Okay, so adults see through many of these creative ploys. Still, children’s ideas are original. Imaginative. Artistic. And inventive. Children are free to come up with whatever idea enters their mind. At least until adults encourage them to think more rationally. Is that about age five? When they go off to school? Go off to be an inner child?

Example of a Child’s Doozy.

One evening, my three-year-old grandson came into the mudroom with me after a day at the river. He carried a toy jeep. We sat on the bench while I removed his muddy shoes.

His mom came in from the garage. As she passed through to the kitchen, she said, “Put the jeep in the toy closet and come upstairs to get ready for bed.”

My grandson glanced at the door to the garage and then leaned toward me. His eyes were large and earnest. He spoke in a conspiratorial voice. “I’d better put my jeep in the closet. A robber might come in and steal it. Robbers are very sneaky.”

I replied, “That’s true, robbers are sneaky, but we’ve never had a robber come into our house.”

Grandma’s take on her grandson’s doozy: He disliked his mother’s two directives: putting his toy away and getting ready for bed. He chose to come up with a creative way to obey his mother.

Grandma’s analysis of her response: My inner child delighted in the idea of hiding jeeps from sneaky robbers. Maybe I should hide my iPad before I went to bed. So, I affirmed his truth, but I also had a responsibility to my grandson. I didn’t want him scared when his mother turned the lights off. Afraid that robbers would come into the house.

You Can Juice-up Your Creative Work with “Sneaky Robbers”

2. Come up with a perfectly good solution.

3. Knock on your inner child’s door and ask her to come out to play.

4. Snicker together at the perfectly good solution.

5. Rest your head against your chair, close your eyes, and ask her what she’d do.

6. Use what she tells you, modifying only what is irresponsible.

The next time you’re looking for a good idea, think of sneaky robbers.

What idea suggested by your inner child have you had the courage to use?

“It’s amazing what ordinary people can do if they set out without preconceived notions.” — Charles F. Kettering 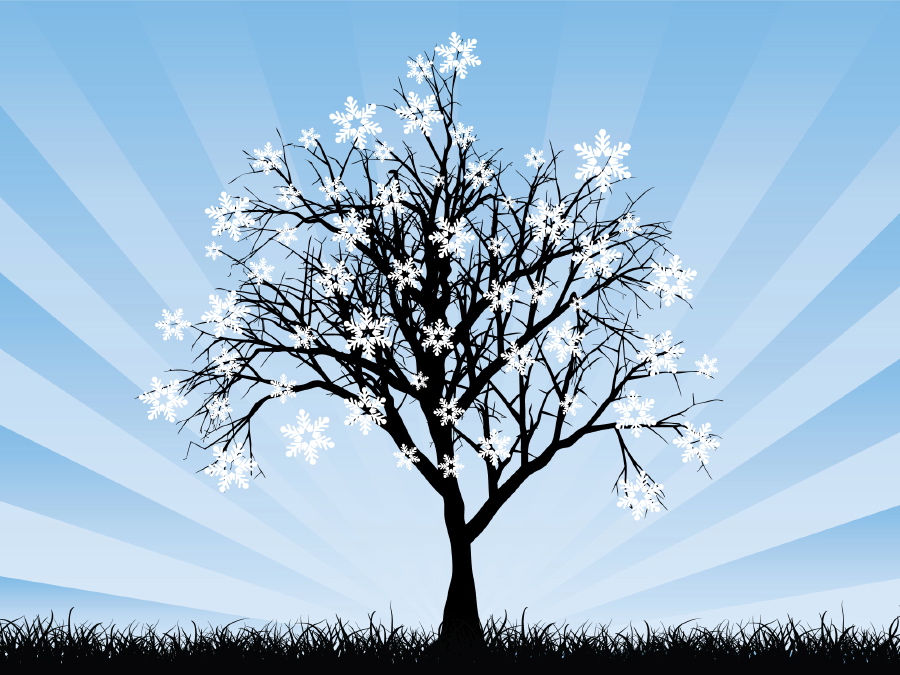 Today in brainstorming a blog idea, my conscience convicted me to address the title of my blog: Creative in Everything. Could I show that everyday people with everyday problems can be creative in everything?

I brainstormed the creative solutions I’ve come across over the years. Without judging their worth, because we can be creative in poor solutions, I merely report them. 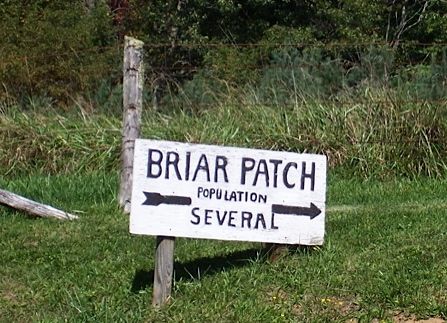 1. How do you lighten the day of a passerby on your rural road? The photo says it all.

2. How do you bore your mind to overcome insomnia? Spell every word that comes into your overactive mind. You don’t have to spell the words correctly.

3. How do you keep the hall light from shining in your eyes while you watch TV in your room? Tear off a portion of the tissue box next to your recliner and wedge it between your face and the ear handle on your glasses.

4. How do you repair a snag in your fingernail when you’re paralyzed on one side? Have your son glue an emery board to an end table. 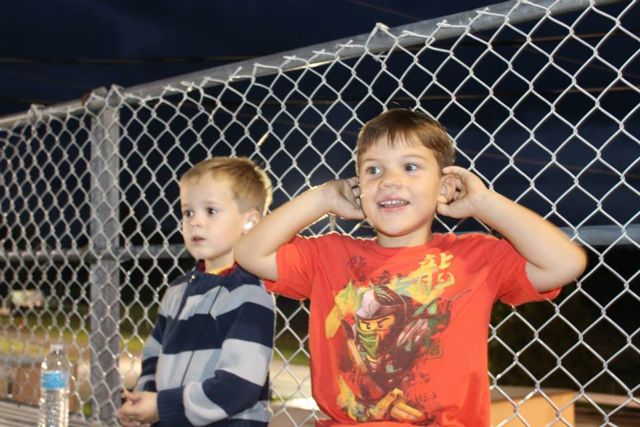 5. How do you protect 5-year-olds’ ears at a drag strip? Stuff their ears with blobs of tissue.

6. How do you manage a runny nose during allergy season? Twist two tissues and stick them up your nostrils.

7. How do you reduce headache pain? Loop a belt around your head and thread the free end through the buckle end. Then pull the free end as tight as you can, making a vice grip.

9. How do you hide the new package of cookies from your family? Put them in the dishwasher. (I’m told they’re fine after they’re forgotten and washed.)

10. How do you at age 3 entertain the neighbor’s child while your mother is occupied? Dust an entire container of baby powered over the playroom, or dump the birdseed into the dryer.

11. How do you manage a stretched-out maternity slip that won’t stay up in the store? The next time it slides down your legs step out of it and keep walking. 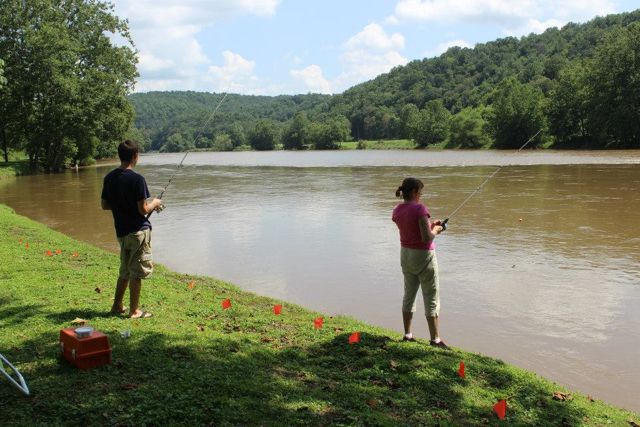 12. How do you remind preschoolers not to go near the river? Stick orange flags every few feet a couple of yards from the riverfront and instruct the children not to go beyond the flags. Then  watch them like a hawk.

13. How do you keep your son-in-law from juggling your fresh tomatoes you store in a bowl? Place three red rubber balls in the bowl and store your tomatoes out of sight.

14. How do you get a class of four-year-olds to listen to the story and answer questions? Tantalize them with the promise that after each correct answer, you’ll inflate more of a hippopotamus balloon that you’ll let fly after the questions are done.

These are the few I could recall in thirty minutes. So, it seems anyone can be creative anytime they see a need.

What creative everyday-life solutions have you witnessed?