Which Is the Right Way to Write This Word? 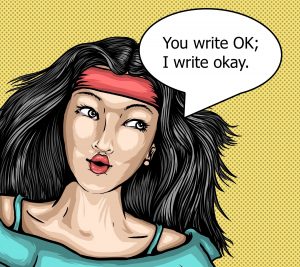 Just when you thought it was safe to write a word or abbreviation a certain way the guidelines change. Yes, trends exist for how to write words. Also, different publishing houses have different guidelines.

You may research the word and become confused or unsure. Here’s the important thing to do: Choose one way of writing the word or abbreviation and write it that way consistently throughout your manuscript. Your editor will make changes according to house guidelines or a trusted source, such as the current edition of The Chicago Manual of Style. 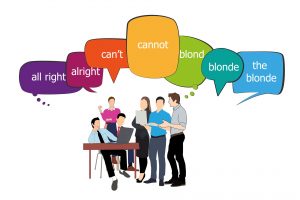 1. Okay, OK – Both are valid according to dictionaries, but the spelling varies by publisher. Choose and be consistent.

2. Blond or blonde – Used for hair color or a person. My 2016 edition of The Merriam-Webster Dictionary (TM-WD) says blond or blonde refers to a fair complexion or a light or bleached color, and both can refer to a person having blond hair. The online New Oxford American Dictionary says, “American usage since the 1970s has generally preferred the gender-neutral blond. The adjective blonde may still refer to a woman’s (but not a man’s) hair color, although the use of the noun risks offense (see that blonde over there?): the offense arises from the fact that the color of the hair is not the person.” Choose and be consistent.

3. Gray or grey – Americans use gray and British use grey. According to TM-WD, grey is a variation of gray. This also could come under a publisher’s preference. Choose and be consistent.

4. Toward or towards – Americans usually write toward and British write towards. Toward is generally preferred. My two dictionary references list toward first and towards second. Choose and be consistent.

5. Internet or internet – My editor, who keeps up to date on trends, tells me The Chicago Manual of Style no longer capitalizes the I. My online New Oxford American Dictionary still has the Internet. Choose and be consistent.

6. A.M., AM, or a.m. (same for PM) – I saw all of these as valid options in my research. Several sources suggested small capitals without the punctuation. Choose and be consistent.

7. Can’t or cannot – Both are good. Can’t is a contraction and is usually used in dialogue and informal writing.

8. All right or alright – In my research, all right is still preferred, except maybe in the dialogue of a young person. Both are listed in TM-WD. All right is preferred in the online New Oxford American Dictionary. Which form will be used will probably come under the publisher’s preference.

You look up words and abbreviations, but you’re still confused as how to write them. Click to tweet.

What are other word or abbreviations that puzzle you?

← Prev: It’s Never Too Late to Write a Novel Next: Don’t Make Your Characters Do the Impossible →