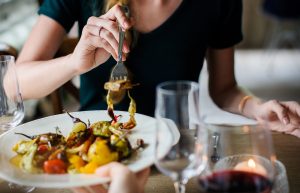 Try this exercise and see if you can improve the example below that over details the movements of the characters. You’ll replace movements with fewer words or delete them. Have fun.

The Passage Loaded With Details

Dan gripped the handles of the wheelbarrow full of seedlings, lifted them up, and pushed the wheelbarrow to the straw bale garden. Katherine plodded her feet behind him carrying a trowel in her left hand, wire cutters in her right hand, and a box of seed packets under one arm. They would plant in an hour what most farmers planted in a day. He’d prove to the local farmers he wasn’t crazy. 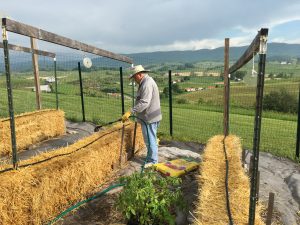 Katherine pinched the hook on the door between her thumb and forefinger and pulled it out of the eye on the jamb of their fenced enclosure. Once inside, they reached for their seedlings from the wheelbarrow and the seed packets from the box and set them at the base of the forty fertilized bales according to Dan’s planting diagram.

As Joe Brown passed in his truck, he shifted down the gears, stuck his arm out the window, and flapped his hand. “You think those hay bales will grow anything, Dan?”

Dan lifted his torso until his back was vertical. “Straw bales, Joe. Hay bales won’t work.”

Joe raised his thumb on his fist and his chin moved up and down as he laughed and drove on.

Dan poured a thin layer of potting mix from the bag onto the tops of the bales for the seeds and smoothed it out with his gloved hand. “We’ll never live this endeavor down if the seeds don’t sprout and the seedlings don’t bear vegetables.”

Next, see what you can do with the following movements to make the excerpt more concise.

Dan maneuvered the wheelbarrow full of potted seedlings to the straw bale garden. Katherine strode behind him armed with a trowel, wire cutters, and a box of seed packets. They would plant in an hour what most farmers planted in a day. He’d prove to the local farmers he wasn’t crazy.

Katherine unhooked the door to their fenced enclosure. Once inside, they placed their seedlings and seed packets at the base of the forty fertilized bales according to Dan’s planting diagram.

As Joe Brown passed, he slowed his truck and waved. “You think those hay bales will grow anything, Dan?”

Joe gave him a thumbs up and guffawed as he drove on.

Dan spread a thin layer of potting mix on the tops of the bales to be seeded. “We’ll never live this endeavor down if the seeds don’t sprout and the seedlings don’t bear vegetables.”

I invite you to include your rewrite in the comments.