Authorial Intrusion – Readers Get a Dose from the Writer

Authorial Intrusion as a Literary Device

In authorial intrusion, the author directly addresses the reader, intending to build a relationship with the reader on some level.

This literary device was popular until the 20th century. The movie, Ferris Bueller’s Day Off (1986), represents well-planned authorial intrusion as Ferris tells about his day off.

How to employ authorial intrusion.

I’ve put the intrusion in italics solely to highlight it for you.

Couldn’t Bill rake faster? The debate team would blame him if Bill was late. Jack snatched the rake from Bill and piled up leaves. Bill watched.
It was common knowledge that Jack could be impatient at times, and this was one of those times.

Cassie stealthily handed Ruth the bobbin. Bobbins are used in sewing machines to hold the thread that catches the top thread in the needle to make a stitch. 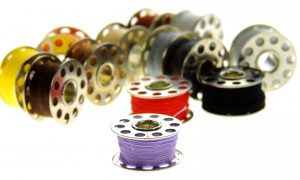 Wendy had no energy to can peaches. Unchecked cancer cells inside her lungs were dividing to develop a second tumor.

As Jack stretched his leg muscles, butterflies in his stomach jumped the official’s gun and raced in circles. In minutes, he’d collect his winnings and have the money to propose to Kate. You can imagine how devastated Jack will feel when he loses the race.

Tina interrupted the flow of her novel and told the reader her character was headstrong. She was no worse than other novice writers who disrupt the story to tell the reader something they could easily show from the character’s point of view.

Using authorial intrusion is difficult to interest today’s reader. It is more successful for children’s books. 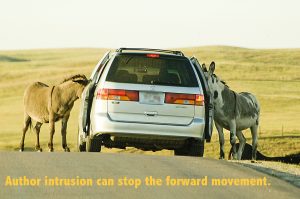 For novels in which characters tell the story, the writer’s voice is a definite intrusion and pulls the reader out of the story. The reader may be identifying with a character, then is suddenly in a one-sided conversation with the writer. The reader doesn’t know whom he should identify with—the character or the author.

Remember, in first-person narrative the character should give thoughts, opinions, and observations that belong to him, not to the narrator.

Sometimes, writers slip into their stories. I imagine the character looking up and saying:

“Author, did you mean to interrupt my leap off the truck? Was explaining that my jump was a bad move because I had broken my ankle five years ago necessary? I was just about to hit the ground, roll, and then duck into the roadside ravine before the driver sees me. Now you’ve distracted the reader from my cool move. Are you so jealous of my relationship with the reader that you must call attention to yourself? How about letting me tell my story? Don’t you agree, Reader? It’s just you and me until the end.”

Which do you prefer: intimacy with the hero/heroine or with the author through authorial intrusion?

← Prev: Circumlocution - Bore Readers with Overkill, or Not? Next: Faulty Parallelism: Parallelism With a Rebel →