“[Word usage is] something teachers generally expect you to pick up on your own, and it’s the thing you’re most likely to get skewered for if you screw up.” — Mignon Fogarty 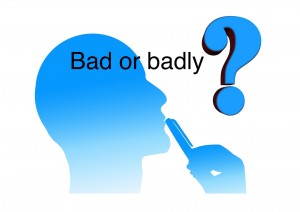 “Stay for a while” is correct.

In a while, while is a noun.

Awhile is an adverb

An adverb can’t be the object of a preposition, so here are the correct ways to use awhile and a while.

“I feel bad” is correct.

The adjective bad follows linking verbs, such as feel, smell, and am.

“The blond shook his fist” is correct.

According to Ide, blond is the adjective and noun used when referring to a man or boy. The blond boy followed the blond named Bill.

Blonde is the adjective and noun used for females. The blonde policewoman cuffed the voluptuous blonde.

Exception: In writing articles, the adjective blond is used for both genders.

“He clenched his jaw” is correct.

Think closing for clench and securing an agreement for clinch.

“If something is likely to happen, use may.” 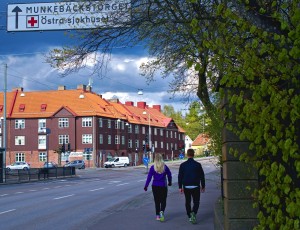 “They passed the house” is correct.

Passed is a verb.

An adjective. My acting career is past.

A preposition. She walked past the couple.

A noun. All her memories centered on the recent past.

“I ran as if a monster pursued me” is correct.

Or equally as good:

Ide: “Use as when comparing phrases and clauses that contain a verb. … Use like to compare nouns and pronouns.”

“I always rise…” is correct.

What words do you misuse? Does your publisher disagree with any of the above?

Those of you who enjoy notifications through the ACFW loop will no longer receive them after 10/1/2015. Please consider clicking on Follow Blog Via Email to receive my posts.

← Prev: A Timesaving, Stress-Reducing & Content-Refining Model for Bloggers Next: 6 Questions to Ask to Take Your Paragraphs from Blah to Ah →