“First attempts are usually not the best. There’s a reason the “test” pancake is usually a throwaway, and upgraded cellphone models are rolled out roughly every four days.” —Leigh Anne Jasheway “Improv/e Your Writing” Writer’s Digest November/December 2013

I wanted to try one of Leigh Anne Jasheway’s 10 games from her article, “Improv/e Your Writing” (Writer’s Digest November/December 2013). Jasheway calls the game I played, “New Choice.” It’s to help when we’re “going down a literary dead end.”

How I understood the play:

My selection is from an old rejected manuscript. I rolled a 7.

Jonathan thumbed to the first hymn listed in the bulletin and stuck his bulletin in the hymnal to hold the place1 Movement to his left startled him, and he looked up. 2 Laura, followed by Cecil, sidled down his row and sat next to him. 3 The sleeve of her yellow jacket brushed the sleeve of his sports coat. 4 She smelled like fresh-cut citrus. 5

Well, well. 6 Laura Midkiff had decided to befriend him after all, and she didn’t take her commitment lightly. 7 He, and most likely everyone else in the congregation, stared at her. 8 She donned a serene expression and gave her father in the pulpit her attention. Her father struggled to contain a grin. 9

A hand patted Jonathan’s shoulder. 10 He turned and greeted his foreman, Gene Pasternak, and his wife and two sons. 11 Mrs. Withers, his first and fourth grade teacher, settled in the pew in front of him, and Mrs. Mackey, his den mother, winked at him and joined her. 12

Here’s the result of steps 1-5— my 12 replacement sentences starting at line 7:

How thoughtful of Laura Midkiff to sit beside him in church.1 No doubt, the woman was up to something.2 Town gossip pegged her as the citizens’ choice to run against Dad for mayor.3 Perhaps her show of friendship helped to that end.4 Display how noble she was to rub sleeves with an ex con.5 And no surprise she’d enlisted slow-witted Cecil.6 He added political correctness points to her glory.7

Was he coming down too hard on Laura?8

Even if her gesture was sincere, he didn’t want her pity.9 He needed her help.10 And that didn’t mean rallying the congregation to his side.11 Laura Midkiff was the only person who had the contacts he needed to prove he was innocent of manslaughter.12

I hope the new version adds tension. At this early stage in the story, warm fuzzies were a mistake.

What are your thoughts on playing Jasheway’s game?

“Find the “hook” or the zinger in every sentence, and have characters react to that.”        —Susan May Warren 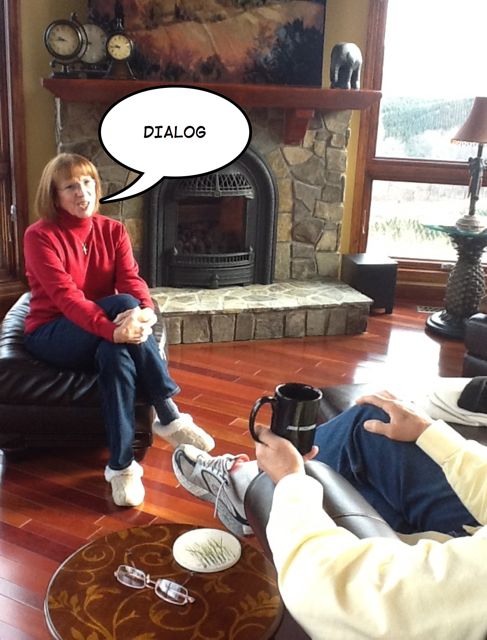 You want your dialog to be real, meaningful, and hold your readers’ interest.

Here’s what Susan May Warren calls her “super-secret Susie hint to writing great dialogue” that I learned in one of her Deep Thinker’s Retreats.

Include a zinger in conversations.

You can learn how to write zingers in Susan May Warren and Rachel Hauck’s writing reference, From the Inside…Out.

Below are examples from 4 novels to show you what a zinger is and how to use it.

—from Wish You Were Here by Beth K. Vogt

Was he choking back a laugh? Confirmation the dress was a nightmare.

“Yes. Please, no comment.” Allison ran her hands along the flowing skirt as if she could tame it. Not going to happen.

Allison blew a wisp of hair out of her eyes. “Are you kidding me? I look like the Bridal Fashion Disaster Barbie.”

Suppose this ended with, “I wish that were true.” Wouldn’t that have killed the conflict, and the fun?

—from The Wedding Dress by Rachel Hauck

She gazed into his eyes. He couldn’t…it would crush her. Her fingernails dug into his arm.

“Yes. So goes the word around town. But you should find out the truth yourself, Emily. You know how gossip gets all twisted and maligned.”

“No, no.” She jutted backward, shaking her head, her dark eyes narrowing. “You’re a liar, Daniel Ludlow. I don’t believe you.”

What if Emily had simply said, “I don’t believe you.” We wouldn’t know how hurt she is. Calling Daniel a liar shows what “kill the messenger” means. She zinged Daniel and raised the conflict.

—from Just Between You and Me by Jenny B. Jones

“I care so much about you. And recently I realized those feelings have grown into something more. I’m crazy about your laugh, your smile, your sense of adventure. I want to tell you that I—”

Zing!  Did Maggie’s last words wake you up? Suppose Maggie had said, “Please. Not tonight, John.” We might prepare to read through a laborious letdown.

—from Nothing but Trouble by Susan May Warren

PJ reached the second fence and didn’t care in the least that she ripped out the backside of the jumpsuit. She landed with another whump while the goat shoved his nose between the chain links, mawing. Good thing Billie filled up on Ernie’s tulips or tomatoes or whatever, or she’d be goat fodder by now.

Pizza Guy landed beside her. “You have a fan club.” He held out his hand to pull her up.

She swatted it away. “It’s not funny. She could have eaten me.”

“Oh yeah, goats are known predators. Right up there with mountain lions and wildebeests.”

What if Pizza Guy had said, “The goat wouldn’t have eaten you.” He’d seem bland, unable to banter.

What zinger have you used in dialog?