Surprise Your Readers With a Red Herring; They’ll Love It 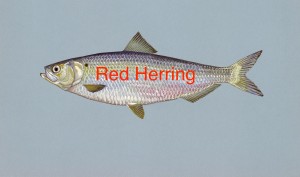 Definition of a red herring:

In storytelling, a red herring is an author’s intentional misdirection of the reader or a character. The author introduces a

from the original issue and leads him

in the wrong direction or

to a false conclusion.

Red herrings aren’t for mysteries alone. Their subsequent surprises delight readers as does a gotcha, twist, or unexpected revelation. 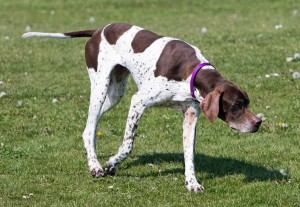 A popular version for the origin of “red herring” is:

A hunting dog training technique. When the pungent odor of a smoked fish no longer diverts a dog from other scents, he’s ready for work.

How to incorporate red herrings in a story: 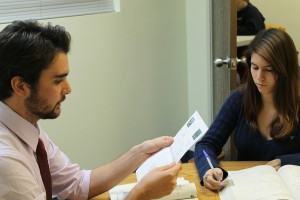 For example, we might believe a high school teacher talks to his students in social situations about the evils of drunk driving because he cares about their and others’ safety. Then we find out his real motive is to learn which teen is the hit-and-run driver that put his son in a wheelchair for life. 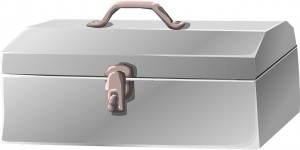 People see Sadie often carrying a small toolbox around town. She asks Deputy Wade to fix a leaking pipe at her home, a broken shelf at her shop, and the radiator in her Sunday school classroom. Her friends and the reader think Sadie uses tools to break things to woo bachelor Wade while he fixes her sabotages.

However, in the locked toolbox is a Colt 45. The gun is too large and heavy for Sadie’s purse. And children are too curious to see what’s inside a basket. When questioned she says she’s trying to repair things, a.k.a. her life.

She learns Lyle, who knew her when she worked in a saloon, is now out of prison and is coming to kill her reputation and her. Her testimony at his trial put him away for ten years. She’s called on Deputy Wade to fix things to have him close by for her safety, not for love. Of course, the reformed saloon gal and the deputy warm up to each other in his visits.

In this case, the toolbox and Sadie’s motives are red herrings.

What red herring have you intentionally used?