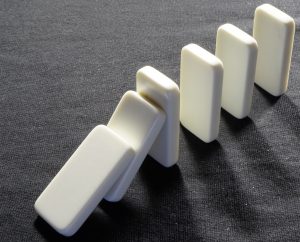 If your character acts in real time, the reader will move along with and feel closer to, the character. This means the author never tells actions before they happen.

In the paragraph below look for five instances in which the author tells an action before it happens. Try rewriting the paragraph so all actions are linear. (Speaking dialogue is an action.) 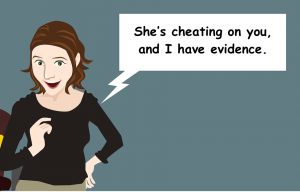 As she buttoned her coat, Melissa spoke in earnest. “Listen to me, Alex. Jeanne is cheating on you.”

Alex couldn’t listen to Melissa for another second. Before he opened the apartment door for her, he leveled his gaze on hers. “You’re wrong.”

Later, he’d find out he was wrong, but for now, he based his opinion on what he knew about Jeanne. How was he to know Jeanne had cheated not only on him but on her first husband?

Melissa took off the coat he’d helped into minutes ago. “I’m staying until you hear evidence to the truth about Jeanne.”

Alex helped Melissa into her coat.

She fastened buttons. “Listen to me, Alex. I don’t want to hurt you, but you need to know the truth. Jeanne is cheating on you.”

Alex couldn’t listen to Melissa for another second. He leveled his gaze on hers. “You’re wrong.” He opened the apartment door.

Melissa stood and studied him. She couldn’t be right, could she? He’d never seen or heard anything that pointed to Jeanne’s unfaithfulness.

Melissa unbuttoned and removed her coat. “I’m staying until you hear evidence to the truth about Jeanne.”

Don’t you feel more intimate with what’s going on with and inside Alex in the rewrite?

Linear writing keeps readers inside the character’s body and mind as he acts and reacts. Click to tweet.

What other principles help you identify with a character?

← Prev: Vary Sentence Lengths to Give Your Paragraphs a Pleasing Rhythm Next: Wishes for You →