Irony Wakes Up Your Reader With the Unexpected 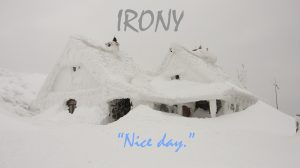 Irony is a literary technique in which the writer sets up the reader’s expectation and then reverses it.

Verbal: The character says one thing and means the opposite. 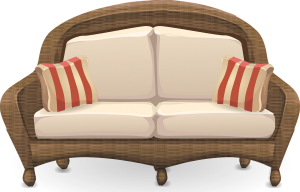 Dan would kiss her tonight. She could feel it in her toes. He’d skirted the armchairs for a change and sat with her on the love seat. What else but kisses could be on the man’s mind? She breathed in his musky cologne, and studied his lips.

He tapped her hand. “You know, Simone, I don’t think you took me seriously outside. If you don’t get the grunge cleaned off your carburetor, your Camaro could break down.” He scrutinized her face. “What’s the matter?”

“Don’t stop talking dirty to me.”

Situational: At the end of a narrative, something happens that’s unexpected or contradictory. 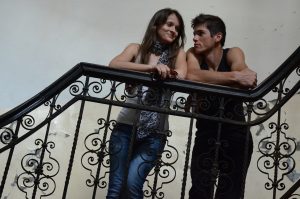 Rick approached the porch, his hands in his pockets.

Nance managed a thin smile. “I’m so glad you came over, Rick. Johnny’s been acting strange. I wonder if he wants to scare me off so I’ll break up with him and he won’t feel like the bad guy.”

Rick sat beside her on the top step and grasped her hand. “Come on, Nance, Johnny adores you. You know that.”

“Then why’d he break our date in front of his friends.”

“You know jocks. They need to save face around other guys.”

“He’s never been that rude to me. And how about Saturday when he went inside the house to wash off car grease. I asked him to bring me a soda, and he didn’t.”

He squeezed her hand. “Sometimes when men work on something like cars that mean a lot to them, they forget everything else.”

“Yesterday, I made myself a Cobb salad, and when I turned from the refrigerator, he was chomping it down.”

“He probably thought you’d made it for him.”

“I guess I’m being overly sensitive.”

Rick stood and pulled her up.

She nodded toward the door. “You want to come inside for a ginger ale?”

“Naw. Come watch me beat some sense into Johnny.”

Dramatic: What a character says, contrasts with what the reader knows is true.

End of scene A on the porch swing: 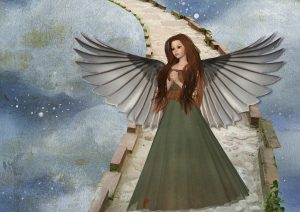 Sally kissed Ronnie passionately, then pulled away. “I gotta go. My boyfriend, Tim, is waiting for me. He has a ballgame tonight. Will you come over while Tim’s gone?”

“Sure.” Ronnie tugged her ponytail. “Wear your hair down, darlin’.

Start of scene B outside the house of Tim’s friend, Ed:

Tim accepted the can Ed slapped into his hand. “Thanks, man. We’re gonna beat them Blue Devils tonight.”

Ed pointed behind Tim. “Sally’s comin’ up the sidewalk.”

Tim turned and grinned. “Have you ever seen such an angel in all your life?”

How have you used irony in your stories?