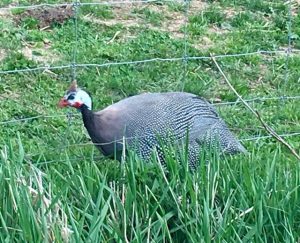 As the people who follow my Facebook author page know, a huge pig at a peculiar farm intrigues me. Horses, regular cows, longhorns, guinea hens, and Pig live there. Pig roots alongside the grazing cows. 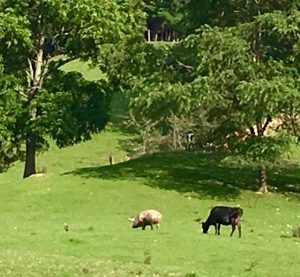 John knows he must be ready to stop if I see Pig in the pasture. So far, this and the next photo are the best photos I’ve taken of Pig. I zoomed in so much the photos are blurry. 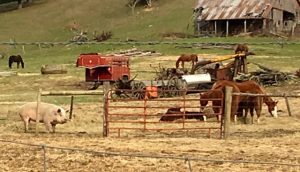 Friends have encouraged me to call the farmer and ask if I can arrange an interview and get a photo of Pig. They say the farmer is a man full of interesting stories.

I’ve learned from another friend raised on a pig farm that male pigs have prominent tusks, because of their testosterone. I’ve seen black wild boars with tusks, but I’ve never seen a pink pig with tusks. Online, I saw many pigs with tusks. I was getting into pigs.

The Process to Include a Subject of Intrigue in a Story

My feelings for Pig came first. Seeing Pig beside cows and horses delighted me. My Facebook conversations with friends germinated the idea to include Pig on my hero’s cattle farm. Then the idea he belonged to the hero’s deceased wife zipped into my mind. I pictured Pig on the book cover. I wanted to interview Pig’s farmer. I realized Pig would be an excellent secondary character.

I needed something to draw tender feelings out of my hero who still mourns his deceased wife after five years.

I don’t want to reveal too much of the plot, but my hero, a man of few words, is a cattle farmer. Pig will have belonged to his deceased wife. And that’s the only reason pesky Pig is not bacon. Pig gets in trouble, and my hero knocks heads with the porker. But my cattle farmer also, begrudgingly, has a soft spot for Pig. They share the bond of mourning the hero’s wife.

My hero’s relationship with Pig gives me a way to show his tenderness concerning his wife other than solely through his thoughts.

Moreover, when the heroine comes to work at the farm, she will develop a special relationship with Pig that creates conflict for the hero.

I know I’ll enjoy writing Pig into the story. But I need an awesome name for Pig. I want one that avoids references to ham, pork, bacon, etc. The deceased wife wouldn’t name her friend with names containing pig edibles. One friend suggested George. Will you please give me alternatives in the comments?

What do you think is the perfect name for Pig?