Writers want readers to picture the multiple-faceted things in their stories. Try these tips on when to use adjectives and how many in an adjective string.

Evaluate the Need for Adjectives

* Cara opened the door and bustled her bags inside.

No adjectives moves the story along.

* Cara opened the front door and bustled her grocery bags inside.

Perhaps the sentence is in a scene’s opening paragraph. The reader learns Cara enters the front of the house and she’s been to the grocery store.

* Cara opened the door and bustled her suitcases inside.

Use specific nouns when possible. Suitcases works without using adjectives, such as in traveling bags.

* Cara opened the men’s bathroom door and peeked inside.

If men’s was omitted, the reader would miss important information.

Do objects need more than one adjective?

Pick one adjective for the door. Above, the reader imagines a tall door then stops to put heft on the door. To me, massive is the better descriptor. If tall is important, include tall in another sentence: The woman tossed the sack to Jack and closed the tall door.

The definition of a gunny sack is an inexpensive bag made of burlap formed from jute, hemp, or other natural fibers. Inexpensive is unnecessary. Jute may not be needed either.

* Cara opened the massive door and hustled the gunny sack inside.

This flows well and gives the reader good images.

Here’s another example. I’ll improve it by inserting and removing adjectives. 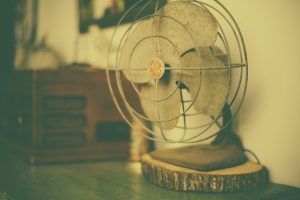 Andy slouched in in his overstuffed, gray, faux-leather chair and wiped beads from his lip. Little moving air reached him from the cracked-open, sash window or the sweeping, blue fan in the left corner. What could he do to escape the heat?

Andy slouched in his faux-leather armchair and wiped sweat beads from his upper lip. Little breeze reached him from the cracked-open window or the sweeping fan in the corner. What could he do to escape the heat?

I added sweat to identify the beads and upper to dash the image of beads on his lower lip. I chose faux-leather from the adjectives describing his chair. The reader may imagine skin sticking to faux-leather in the heat.

I changed the noun, chair, to armchair to improve the image without using an adjective. I replaced moving air with the noun breeze to avoid another adjective-noun combination. I selected sweeping over blue for the fan because sweeping creates movement. I removed sash because it’s not important and slows the sentence. Likewise, I removed left.

What might be an instance when two adjectives separated by a comma are needed?