Malapropism is using a word that sounds similar to the right word the writer intended to use. The word comes from the French expression mal a propos, which means inappropriate.

To add humor to a story, writers sometimes create characters who repeatedly use malapropisms. The best way to avoid accidental malapropisms is to consult your word processor’s thesaurus or dictionary often.

Below I list common unplanned malapropisms, and then for fun, I give some that could add humor to a character’s dialogue or personality. 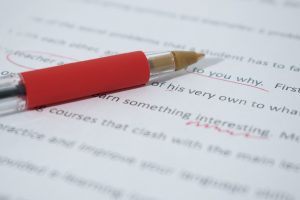 He clenched the deal. (clinched)

“Choose Agent Moss for the job. His photogenic memory will come in handy. (photographic)

Alice got the votes because of her great statue. (stature)

The pyramids have been unparalyzed in world history. (unparalleled)

“Supposively, I’m the next up for promotion.” (supposedly)

“Supposably, I have Lyme disease.” (supposedly)

For all intensive purposes, he was a blue-collar worker. (intents and)

I was saddened that so many children were illiteral. (illiterate)

“If you want to keep this job, you must be punctuate. (punctual)

Her ailment weekend her strength. (weakened)

Fortuitously, she brought in the garments on the clothesline before it rained. (fortunately)

He traveled the torturous road with its hairpin curves. (tortuous)

The job was sedimentary. (sedentary)

“Get things set up, and then we’ll precede with a practice run.” (proceed)

Once we add installation, heat won’t seep out. (insulation)

The clues didn’t jive with the crime. (jibe)

The mayor announced the flooding was too dangerous and called residents to evaporate the area. (evacuate)

“That man is under the affluence of alcohol.” (influence)

“We’ve got to eradicate weapons of mass production for people today and our predecessors. (destruction) (progeny)

“Watch out for that wolf in cheap clothing.” (sheep’s)

“The newspaper said he broke the law of monotony and had two families.” (monogamy)

“No one is going to use me as an escape goat.” (scapegoat)

The drill sergeant was so tough that dysentery rose in the barracks. (dissension)

“I’m going to fatten you up. You look emancipated. (emaciated)

“Let’s celebrate the end of the physical year.” (fiscal)

She grasped the pendulum hanging from her neck. (pendant)

Write sentences in the positive form. Avoid contraptions like won’t and can’t. (contractions)

“I’m telling you, an intruder is a pigment of your imagination. (figment)

“As they say, ‘a rolling stone gathers no moths.’” (moss)

“Well, my son outweighs yours as a suppository of knowledge.” (depository)

What are malapropisms you’ve read or heard?